One After Another Of Great Dharma

Great Liberation From The Cycle Of

Reincarnation And Left Behind 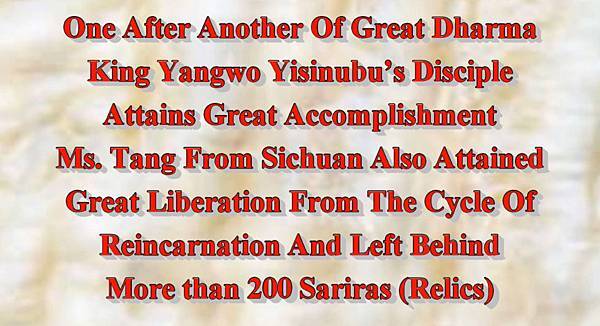 On April 3, 2008, a solemn and dignified first-publishing ceremony of a fact-recording book entitled H.H. Dorje Chang Buddha III, which published jointly by the World Buddhism Publishing LLC and the World Dharma Voice, Inc., was held at the Library of the Congress of the United States. The book was also formally accepted into the collection of the Library of the Congress of the United States. Only since that time, did people in the world know that Master Wan Ko Yee, who had been broadly respected by the great masses and who had also been known as Great Dharma King Yangwo Yeshe Norbu, had been recognized by the world’s leaders, regent dharma kings, and great rinpoches of Buddhism through official documents as the third incarnation of Dorje Chang Buddha, who is the primordial Sambhogakaya Buddha of the universe. The Buddha’s name is H.H.Dorje Chang Buddha III. Since then, people began to address His Holiness the Buddha by “Namo Dorje Chang Buddha III.” This is similar to the situation that Sakyamuni Buddha’s name was Prince Siddhartha Gotama before attaining Buddhahood. However, after Sakyamuni Buddha had attained Buddhahood, His title changed to “Namo Sakyamuni Buddha.” That is why we now address His Holiness the Buddha as “H.H. Dorje Chang Buddha III.” 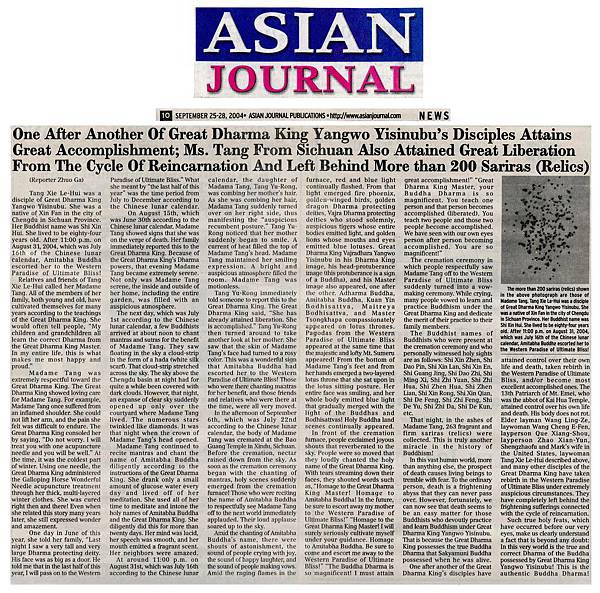 One After Another Of Great Dharma

Great Liberation From The Cycle Of

Reincarnation And Left Behind

Tang Xie Le-Hui was a disciple of Great Dharma King Yangwo Yeshe Norbu. She was a native of Xin Fan in the city of Chengdu in Sichuan Province. Her dharma name was Shi Xin Hui. She lived to be eighty-four years old. After 11:00 p.m. on August 31, 2004, which was July 16th of the Chinese lunar calendar, Amitabha Buddha escorted her to the Western Paradise of Ultimate Bliss!

Relatives and friends of Tang Xie Le-Hui called her Madame Tang. All of the members of her family, both young and old, have cultivated themselves for many years according to the teachings of the Great Dharma King. She would often tell people, “My children and grandchildren all learn the correct Dharma from the Great Dharma King Master. In my entire life, this is what makes me most happy and proud.”

On August 15th, which was June 30th according to the Chinese lunar calendar, Madame Tang showed signs that she was on the verge of death. Her family immediately reported this to the Great Dharma King. Because of the Great Dharma King’s Dharma powers, that evening Madame Tang became extremely serene. Not only was Madame Tang serene, the inside and outside of her home, including the entire garden, was filled with an auspicious atmosphere.

The next day, which was July 1st according to the Chinese lunar calendar, a few Buddhists arrived at about noon to chant mantras and sutras for the benefit of Madame Tang. They saw floating in the sky a cloud-strip in the form of a hada (white silk scarf). That cloud-strip stretched across the sky. The sky above the Chengdu basin at night had for quite a while been covered with dark clouds. However, that night, an expanse of clear sky suddenly opened up only over the courtyard where Madame Tang lived. The numerous stars twinkled like diamonds. It was that night when the crown of Madame Tang’s head opened.

Madame Tang continued to recite mantras and chant the name of Amitabha Buddha diligently according to the instructions of the Great Dharma King. She drank only a small amount of glucose water every day and lived off of her meditation. She used all of her time to meditate and intone the holy names of Amitabha Buddha and the Great Dharma King. She diligently did this for more than twenty days. Her mind was lucid, her speech was smooth, and her mouth emitted a fragrant scent. Her neighbors were amazed.

At around 11:00 p.m. on August 31st, which was July 16th according to the Chinese lunar calendar, the daughter of Madama Tang, Tang Yu-Rong, was combing her mother’s hair. As she was combing her hair, Madama Tang suddenly turned over on her right side, thus manifesting the “auspicious recumbent posture.” Tang Yu-Rong noticed that her mother suddenly began to smile. A current of heat filled the top of Madame Tang’s head. Madame Tang maintained her smiling expression. A bright and auspicious atmosphere filled the room. Madame Tang was motionless.

Tang Yu-Rong immediately told someone to report this to the Great Dharma King. The Great Dharma King said, “She has already attained liberation. She is accomplished.” Tang Yu-Rong then turned around to take another look at her mother. She saw that the skin of Madame Tang’s face had turned to a rosy color. This was a wonderful sign that Amitabha Buddha had escorted her to the Western Paradise of Ultimate Bliss! Those who were there chanting mantras for her benefit, and those friends and relatives who were there at the time, were all very moved.

In the afternoon of September 6th, which was July 22nd according to the Chinese lunar calendar, the body of Madame Tang was cremated at the Bao Guang Temple in Xindu, Sichuan. Before the cremation, nectar rained down from the sky. As soon as the cremation ceremony began with the chanting of mantras, holy scenes suddenly emerged from the cremation furnace! Those who were reciting the name of Amitabha Buddha to respectfully see Madame Tang off to the next world immediately applauded. Their loud applause soared up to the sky.

Amid the chanting of Amitabha Buddha’s name, there were shouts of astonishment, the sound of people crying with joy, the sound of happy laughter, and the sound of people making vows. Amid the raging flames in the furnace, red and blue light continually flashed. From that light emerged fire phoenix, golden-winged birds, golden dragon Dharma protecting deities, Vajra Dharma protecting deities who stood solemnly, auspicious tigers whose entire bodies emitted light, and golden lions whose mouths and eyes emitted blue lotuses. Great Dharma King Vajradhara Yangwo Yeshe Norbn in his Dharma King image, his head-protuberance image (this protuberance is a sign of a Buddha), and his Master image also appeared, one after the other. Adharma Buddha, Amitabha Buddha, Kuan Yin Bodhisattva, Maitreya Bodhisattva, and Master Tsongkhapa compassionately appeared on lotus thrones. Pagodas from the Western Paradise of Ultimate Bliss appeared at the same time that the majestic and lofty Mt. Sumeru appeared! From the bottom of Madame Tang’s feet and from her hands emerged a two-layered lotus throne that she sat upon in the lotus sitting posture. Her entire face was smiling, and her whole body emitted blue light that gradually merged with the light of the Buddhas and Bodhisattvas! Holy Buddha land scenes continually appeared.

In front of the cremation furnace, people exclaimed joyous shouts that reverberated to the sky. People were so moved that they loudly chanted the holy name of the Great Dharma King. With tears streaming down their faces, they shouted words such as, “Homage to the Great Dharma King Master! Homage to Amitabha Buddha! In the future, be sure to escort away my mother to the Western Paradise of Ultimate Bliss!” “Homage to the Great Dharma King Master! I will surely seriously cultivate myself under your guidance. Homage to Amitabha Buddha. Be sure to come and escort me away to the Western Paradise of Ultimate Bliss!” “The Buddha Dharma is so magnificent! I must attain great accomplishment!” “Great Dharma King Master, your Buddha Dharma is so magnificent. You teach one person and that person becomes accomplished (liberated). You teach two people and those two people become accomplished. We have seen with our own eyes person after person become accomplished. You are so magnificent!”

The cremation ceremony in which people respectfully saw Madame Tang off to the Western Paradise of Ultimate Bliss suddenly turned into a vow-making ceremony. While crying, many people vowed to learn and practice Buddhism under the Great Dharma King and dedicate the merit of their practice to their family members.

That night, in the ashes of Madame Tang, 263 fragrant and firm sariras (relics) were collected. This is truly another miracle in the history of Buddhism!  In this vast human world, more than anything else, the prospect of death causes living beings to tremble with fear. To the ordinary person, death is a frightening abyss that they can never pass over. However, fortunately, we can now see that death seems to be an easy matter for those Buddhists who devoutly practice and learn Buddhism under Great Dharma King Yangwo Yisinubu. That is because the Great Dharma King possesses the true Buddha Dharma that Sakyamuni Buddha possessed when he was alive.

One after another of the Great Dharma King’s disciples have attained control over their own life and death, taken rebirth in the Western Paradise of Ultimate Bliss, and/or become most excellent accomplished ones. The 13th Patriarch of Mt. Emei, who was the abbot of KaiHuaTemple, attained control over his own life and death. His body does not rot. Elder layman Wang Ling-Ze, laywoman Wang Cheng E-Fen, layperson Que Xiang-Shou, layperson Zhao Xian-Yun, Shengzhaofu and Mark’s wife in the United States, laywoman Tang Xie Le-Hui described above, and many other disciples of the Great Dharma King have taken rebirth in the Western Paradise of Ultimate Bliss under extremely auspicious circumstances. They have completely left behind the frightening sufferings connected with the cycle of reincarnation.

Such true holy feats, which have occurred before our very eyes, make us clearly understand a fact that is beyond any doubt: In this very world is the true and correct Dharma of the Buddha possessed by Great Dharma King Yangwo Yisinubu! This is the authentic Buddha Dharma!

One After Another Of Great Dharma King Yangwo Yisinubu’s Disciple Attains Great Accomplishment  Ms. Tang From Sichuan Also Attained Great Liberation From The Cycle Of Reincarnation And Left Behind More than 200 Sariras (Relics)

One After Another Of Great Dharma King Yangwo Yisinubu’s Disciple Attains Great Accomplishment Ms. Tang From Sichuan Also Attained Great Liberation From The Cycle Of Reincarnation And Left Behind More than 200 Sariras (Relics) 有 “ 1 則迴響 ”