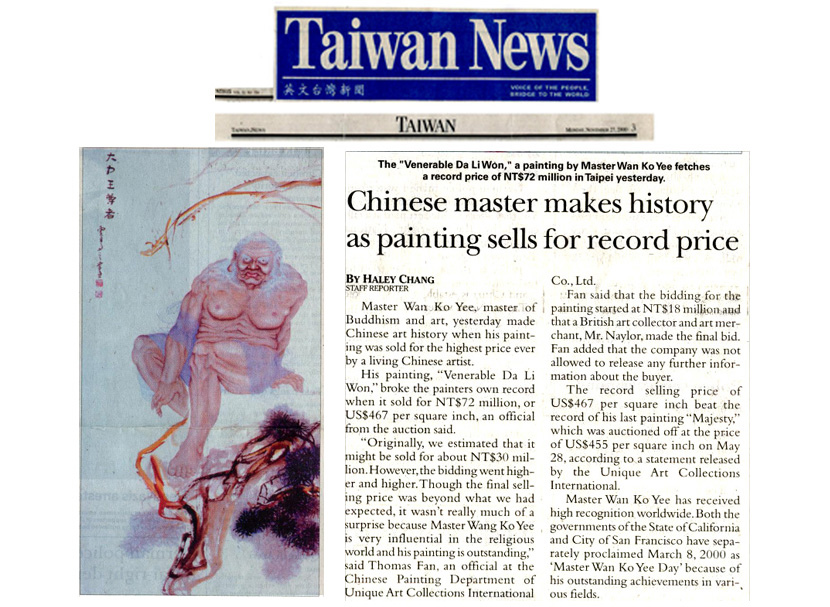 Master Wan Ko Yee, master of Buddhism and art, yesterday made Chinese art history when his painting was sold for the highest price ever by a living Chinese artist.
His painting,“Venerable Da Li Won”, broke the painters own record when it sold for NT$72 million, or US$467 per square inch, an official from the auction said.
“Originally, we estimated that it might be sold for about NT$30 million. However, the bidding went higher and higher. Though the final selling price was beyond what we had expected, it wasn’t really much of a surprise because Master Wan Ko Yee is very influential in the religious world and his painting is outstanding”, said Thomas Fan, an official at the Chinese Painting Department of Unique Art Collections International Co.,Ltd.
Fan said that the bidding for the painting started at NT$18 million and that a British art collector and art merchant, Mr. Naylor, made the final bid. Fan added that the company was not allowed to release any further information about the buyer.
The record selling price of US$467 per square inch beat the record of his last painting “Majesty,” which was auctioned off at the price of US$455 per square inch on May 28, according to a statement released by the Unique Art Collections International.
Master Wan Ko Yee has received high recognition worldwide. Both the governments of the State of California and City of San Francisco have separately proclaimed March 8, 2000 as‘Master Wan Ko Yee Day’because of his outstanding achievements in various fields.